Back when I first started on the web, domain registrars had pretty pathetic web hosting offerings. And it was a bad idea to register domains at web hosting companies.

It was akin to eating gas station steak.

Gas stations are fine for filling up your car with gasoline. But eat a steak from their in-house convenience store, and you might need to use that recently-purchased gas to drive to the nearest hospital to be treated for food poisoning.

Nowadays, low margins have forced domain registrars to not be so terrible at web hosting and other ancillary services.

However, registering domain names at web hosting companies is still a bad idea.

Web hosting companies would often list themselves as the owner of the domain you registered there, putting you at their mercy should you ever want to switch away from them and keep the domain name you built your entire business on.

That doesn’t happen so much anymore, but web hosts still have other ways of holding domain names that you paid for hostage.

Let’s say your web hosting account, where your domain name is also registered, is suspended for late payment. Your domain is not close to expiration, and is registered under your name.

You don’t want to use that web host anymore anyway, but they’re asking for a steep “hosting account reactivation fee” before they will give you the required information in order to transfer out your domain name.

While there is a regulatory body called ICANN that is supposed to protect against these sorts of abuses, it can be costly and time-consuming to deal with.

It would be easier if you kept your domain at an actual domain registrar like NameCheap, where you’re free to use their DNS to point to any web server at any time.

DMCA, which stands for Digital Millenial Copyright Act, is intended to be invoked when there’s some sort of copyright violation.

For example, ripping an entire Hollywood movie and then uploading it to YouTube for free, or copying and pasting an entire news article and posting it on another website without permission.

However, it’s not unheard of for fraudulent DMCA takedown notices to be sent in order to censor a publisher. With some exceptions, web hosts will often acquiesce to these fraudulent notices to avoid legal trouble.

Let’s say a DMCA troll is trying to take down your site because you said something mean about them. Instead of sending separate two takedown notices to your web host and domain registrar, the DMCA troll only needs to send one.

A persistent troll and a pushover web host may lead to your site being taken down anyway, but consider a scenario where your domain name and web hosting are run by separate entities, and only the web hosting company complies with the DMCA notice.

You could still login to your domain registrar, point your domain name to a new web host with a fresh backup of your website, and be up and running again in no time.

Hopefully the new web host won’t be such a wimp and give in so easily to fraudulent DMCA takedown notices.

Web hosting companies will often entice you to register your domain with them with attractive “free domain with a year’s hosting” deals and the like.

But keep this in mind: a web hosting company’s best interests may not be aligned with yours. You must resist these enticements (that are maybe worth $10/year tops) and do what’s best for the longevity of your business.

Registering a domain at a web hosting company (even for “free”) can restrict your freedom and make you more vulnerable to copyright trolls and other targeted attacks.

Never register domains at your web host. Never web host at your domain registrar. No exceptions. 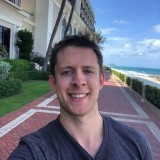 A web developer with over a decade of experience. Leland is a big advocate of "owning your platform" and encourages it by writing about it at Own Your Platform. He also runs a WordPress theme shop called Themetry and a community forum for WordPress users called WP Chat.